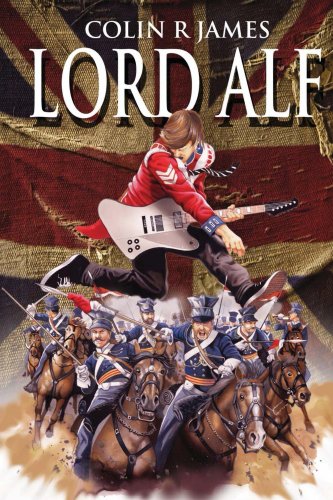 The hammer is poised, the metal is hot and the atmosphere in the auditorium is electric. The boys burst through the dry ice, on to the stage, and into their routine. Tennyson’s charge comes alive; a hoof-thundering dash of British humor, classic literature, wailing guitars, and schoolboy inadequacy.

It’s the end of the school year, exams are finished, and Jake and his mates are going out with a bang. The sixth form ‘Blast’ is ahead of them as the lads prepare for one final blow out. Ending their time at ‘Woldcroft Comprehensive’ and taking their rightful place in the annals of high-school history before disappearing to leafy college “nowheres.” They have practiced, they are word perfect, the act is finely tuned, and they sort of look the part!

‘Lord Alf’ traces the experiences not only of the boys’ performance, but of a soldier who actually rode in the charge, Tennyson himself, and his creation ‘The Charge of the Light Brigade.’ The story unfolds in the corridors of an English secondary school with all the foibles of a depressed Thatcher Britain. It takes us across the battlefields of the Crimea, placing the reader in the center of the charge, and walks the reader through the streets of Victorian England.

‘Lord Alf’ documents the quirks of British adolescence in a dwindling age of empire, a riveting story which shows depth, historical nuance, emotion and humor. It highlights the wastage of war and compares and contrasts the social issues of Victorian England with the modern age.

There are no reviews yet.

Be the first to review “Lord Alf” Cancel reply